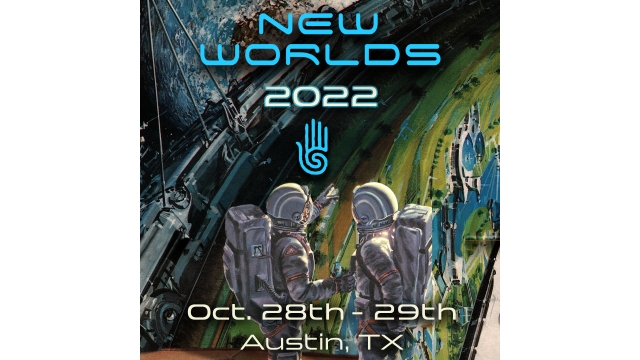 AUSTIN, Texas – The EarthLight Foundation, New Worlds Institute, Foundation for the Future, and their partner Gaaays in Spaaace announced that the Space Cowboy Ball will blast off October 28 at the Grand Ballroom of the AT&T Conference Center in the heart of the University of Texas in Austin.

“What would you wear to a party on Mars in a hundred years?” This is the critical question answered by those attending the Ball on the Friday night before Halloween in Austin, Texas. A combination award dinner, masquerade Ball, concert, and dance party, the Ball raises the roof while raising awareness and funds for space education – with a focus on under-included groups.

“A. This is Austin, and weird is our watchword,” said EarthLight and Ball Founder Rick Tumlinson. “B. Nerds are actually super cool, and a rocking masquerade party is a great way for them to come out of the airlock; and C. It’s important to recognize the amazing science educators and others teaching and inspiring new generations to dream about building a better future, on the New Frontier of space. The Space Cowboy Ball does all of these – and it’s fun!”

Presentation of the Space Cowboy award is the event’s main thrust. Past winners include Jeff Bezos, who attended in person in 2018, Apollo astronaut Buzz Aldrin, and Luxembourg’s Deputy Prime Minister, Etienne Schneider, who accepted for his nation’s commitment to space development. Other awards include the Permission to Dream Award for Inspiration and Education – given to a teacher or educator who has transformed the lives of young people, and the Odyssey Award for Film/TV – first won by the science fiction drama “The Expanse.” This year will also see the first-ever presentation of the Odyssey Award for science fiction literature. Winners of all four awards are secret, and will be announced in the coming weeks – including some major celebrity surprises.

“I’ve worked for many years to help inspire and light the imaginations of artists and students here in Texas,” said Ball Co-Chair Karissa Winters. “Recognizing excellence in advancing this great cause is important,” she continued. “EarthLight stands for many of the good things we want to communicate to industry, educators, the media, and people in general, from hope, to caring for Earth, to exploration and access for all. The Ball gives us a chance to do that and to have a great time at the same time! I’m honored to be part of such a cool event!”

Featuring a multi-station Texas buffet, live music will be performed by star Austin musicians such as David Pulkingham, who has played with Bruce Springsteen, Robert Plant and Patty Griffin, and local legend Emily Grace – Clarke, backed by their band of top shelf professional Austin music stars, known for the night as the “Space Cowboys.” After the awards, the Ball transforms into the “StarDancer Saloon” blasting into a full DJ dance party co-sponsored by Gaaays in Spaaace, with celebrity DJ Chrispy spinning, while live artists paint, jugglers, aerialists and Start Wars storm troopers and other wild and beautiful cosplay models and dancers create a mood that one party goer dubbed akin to being like “Burning Man on a Rocketship.”

“The Ball is not just a party,” said Kim Macharia, Executive Director of the Space Prize, an advocacy and inclusion oriented charity, who is also Co-Hosting. “It represents our belief that space is for everyone, and that this isn’t some exclusive elitist field that is inaccessible to the everyday person. Art, music, hope, inclusion, and celebration are what NewSpace and New Worlds are all about.”

Ball tickets have been reduced from $350+ in years past to only $100 for early birds due to the challenges of a post-covid world and are available here: SpaceCowboyBall.com

The Ball is part of EarthLight’s two-day New Worlds Conference, which runs from Oct. 28-29 at the AT&T Executive Center in the heart of the University of Texas campus. The curated meeting is open to the public. It features astronauts, scientists, space policy experts, entrepreneurs, and investors who come together to talk about what they are doing to open space to humanity. The event also features artists, designers, inclusion and workforce development experts, and other great speakers.

Stay tuned for the amazing winners of the awards in the next weeks!

UKBTC – Analysis of the future development of blockchain technology

AMP Token is an Exciting Cryptocurrency. Bringing Crypto Payments to the World

Which should you choose between Socks5 proxy and VPN

Demon-Box: A Unique Way of Gifting

Revival of avalanche – a mindblowing fight to earn game

MILLIONAIRE HEDGE FUND MANAGER NICK MUGALLI TROUNCED THE S&P 500 & HIS RIVALS IN 2022 WITH A ASTOUNDING 64.2% RETURN

ERTC Deluxe Launches Service To Get ERTC Refund for Businesses